A look inside KOTN 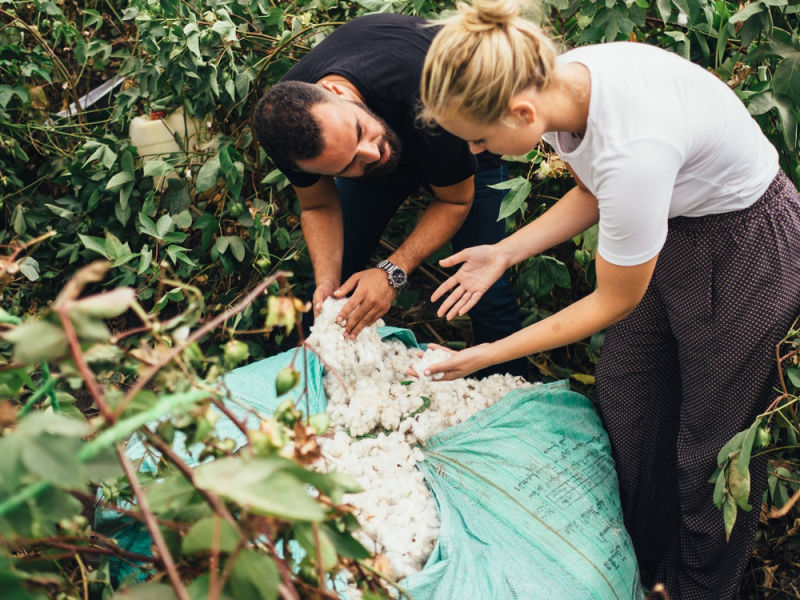 Rami and Mackenzie in the cotton farm, Faiyum, Egypt.

A note from the founders: As we introduce our first co-creation to the world, we felt
compelled to share how this collaboration came to be. From GOODEE’s earliest days, we’ve been keen to create a Goodee hoodie. The rhyme scheme felt irresistible, and the idea of designing a companion for our growing community, even more so. When we met Rami, Mackenzie and Benjamin, the founders of KOTN, we knew their clear-eyed perspective would help bring this project to life. Through shared values and steadfast commitment to human and environmental sustainability, our collaboration has taken us on a meaningful journey between Canada and Egypt. Today, we’re proud to present the fruit of this cultural exchange. We hope the conversation that follows takes you on a similar journey and allows you to get acquainted with a partner we have grown to love and admire. Enjoy. Byron & Dexter

When KOTN founders Rami Helali, Mackenzie Yeates and Benjamin Sehl set out to
make a better t-shirt, they quite literally started from the ground up. Harvesting Egyptian cotton from the rich soil of the Nile Delta was their key to durability, but it is their careful consideration of its journey from seed to fabric that would ultimately make their garment “better”. Today, the Toronto-based label remains at the helm of its supply chain and prides itself on the relationships forged along the way.

I met with Mackenzie and Rami in KOTN’s newly inaugurated shop in Montreal’s Mile
End neighbourhood to discuss the intentions behind the business and the production cycle at the root of it.

At a time when brands and consumers face existential dilemmas, having an honest
conversation about fashion, sustainability and humanity felt not only relevant, but necessary.

*This interview has been edited and condensed. 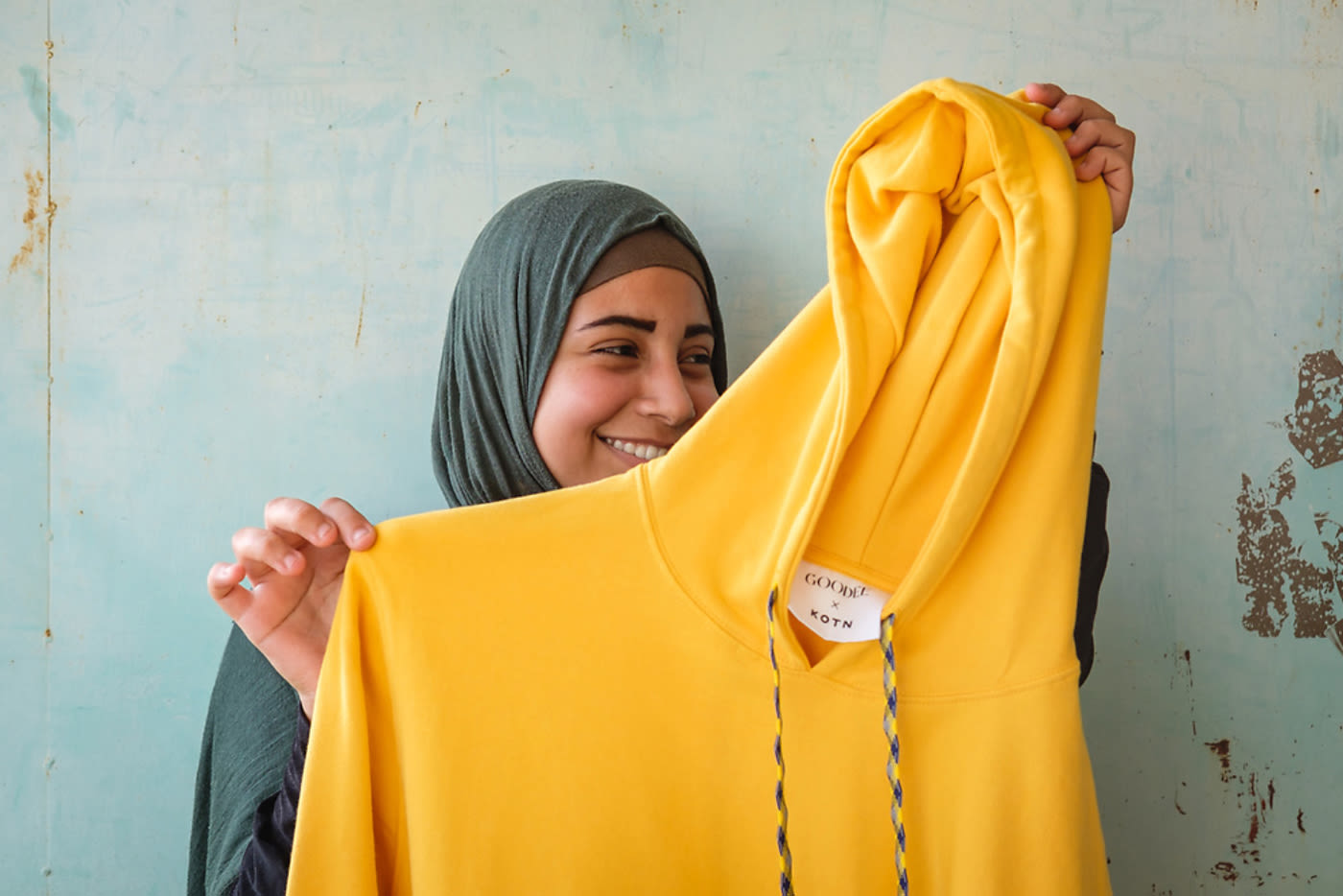 Elise: Part of KOTN’s origin story stems from a hot New York City summer that
sparked a conversation around making a quality t-shirt at an accessible price point, but on your end, Rami, there also seems to be a “returning to your roots” story. How has the experience of going back to Egypt been for you?

Rami : I had a unique experience growing up. I very much see myself as a Canadian
and North American—my lens is rooted here. But my family also allowed me to develop a lens on what being an Egyptian is like. Those two perspectives, and that combination, has been very influential in creating the person that I am. I think that’s actually one of the most beautiful things about being Canadian, there’s no one visual or audible identity. That combination of those roots creates this incredible place that we call home. So, when we started having this discussion about how to make a better t-shirt, I knew that Egyptian cotton was the thing. It was as simple as that in the beginning. I didn’t really know where it was grown—but we figured that I’d go back and figure it out. The thing is, rural Egypt is a different beast than urban Egypt, so I realized that although I speak fluent Arabic, my nuanced body language is very much North American. For the first time, I felt like an outsider in Egypt. 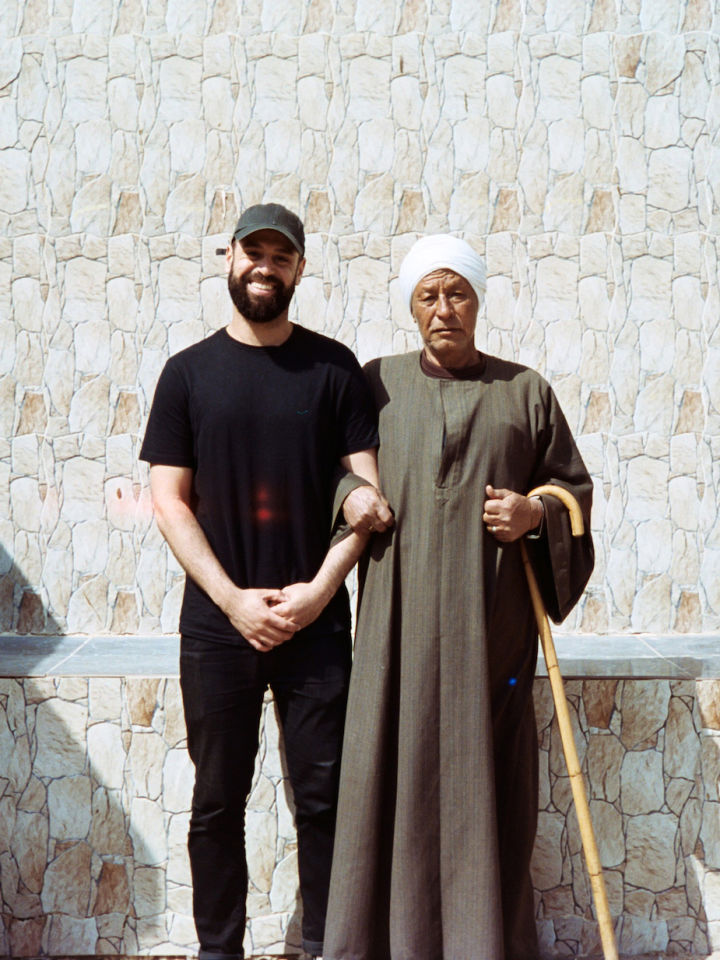 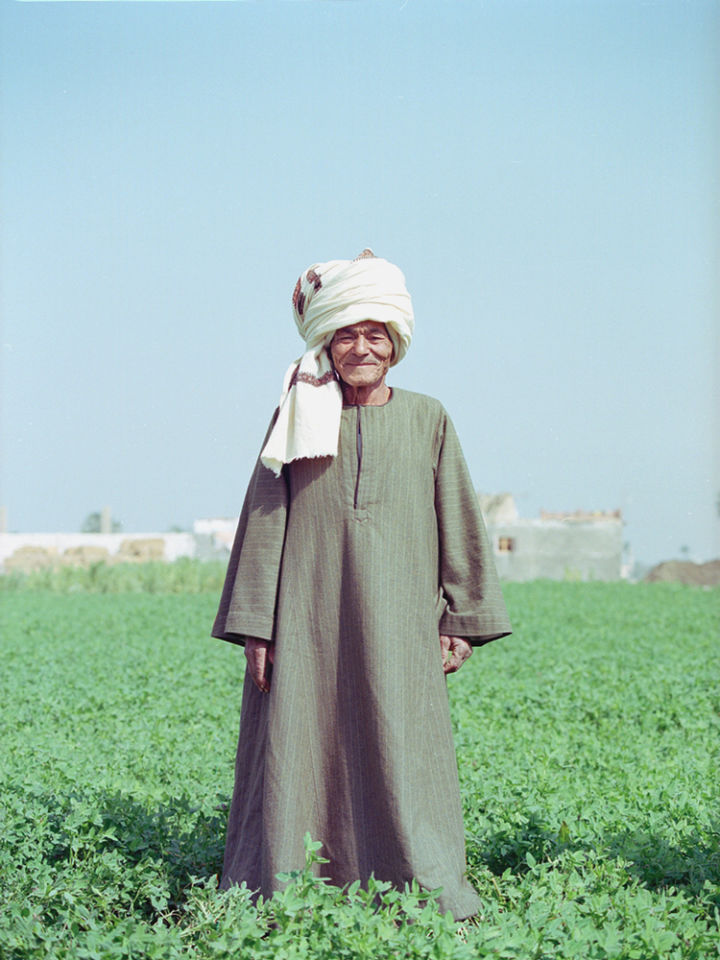 Elise: We’re in 2015, you return to Egypt seeking suppliers—where do you start?

Rami : My maternal grandfather is from a village where Egyptian cotton is grown, so I
drove there— I literally got in a car, drove three and a half hours on a bumpy road and showed up in this town called Al Hajayzah and said, “Hey, do you guys grow Egyptian cotton?” And these people were like, “Who is this weird combination of Egyptian and something else we don’t know?”

It took a bit of persistence to convince the original farming communities to trust the intentions and the beliefs that we had. But eventually, we convinced 12 farms. After that, we needed to figure out how to make yarn, how to make fabric, how to make a t-shirt. Our lack of experience in production and in fashion design made us question things that probably a lot of people who know supply chain wouldn’t otherwise. Our naive ignorance was really helpful. We were like, “Yeah, you start at the farms—obviously,” but people don’t do that. It took six months to get a t-shirt done. It sounds like a long time—and it is— but we were learning as we were going. 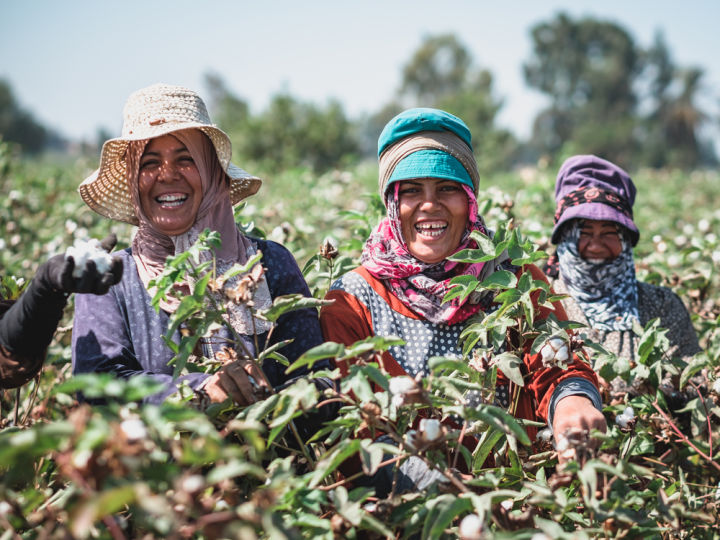 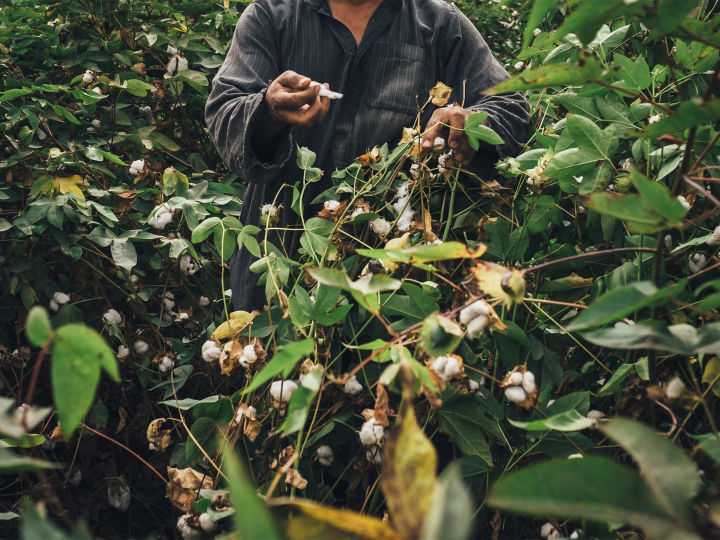 Elise: From a consumer perspective, the 2013 Dhaka garment factory collapse in Bangladesh exposed the world to how the fashion and textile industries actually operate. If you were to establish the problem within these industries, how would you explain it?

Rami : I think it’s a combination of a few things. The first thing is, a lot of people, myself included, didn’t realize how deep the fashion supply chain was. If you look at suppliers as tiers: Tier 1 being a cut and sew, Tier 2 being where your fabric comes from, Tier 3 being where your yarn and other trims come from and Tier 4 where your raw materials come from. 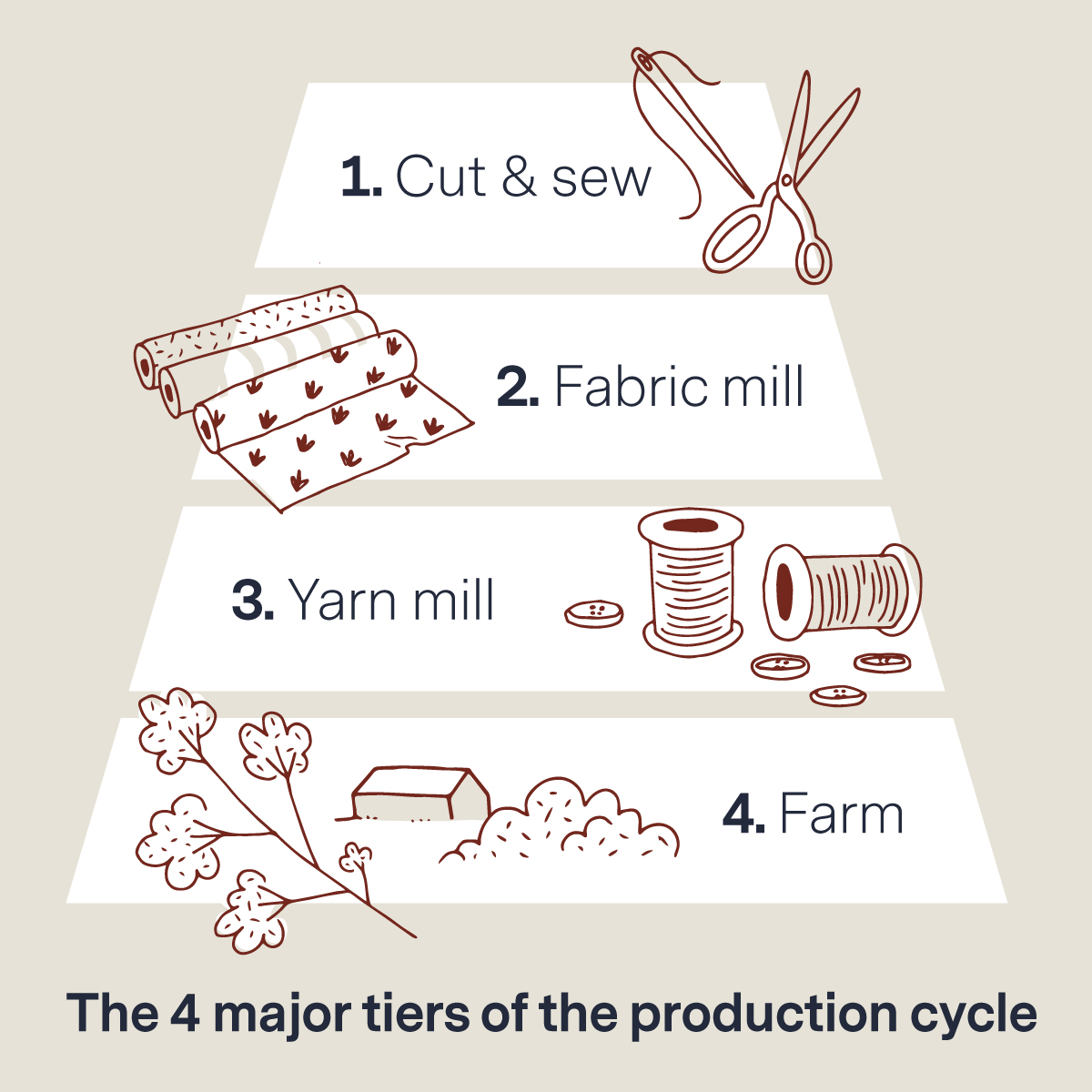 The other thing is textile is a huge employer of women and specifically women of color in developing countries. They are underpaid, overworked and in a supply chain that is basically a black box. Then, I think the last thing is the consumer habits on the other side.

Mackenzie : The fast fashion industry tapped into a magic marketing technique of making people feel rich by offering really underpriced products—at the cost of the people that make them. It’s hard to reverse that expectation. That is one of the reasons we wanted to make clothes that were affordable. They’re not cheap by any standard, but we’re not expecting our customers to be able to pay $100 for a t-shirt. We still pay everybody fairly along the way and having that transparency allows us to cut costs at every step. 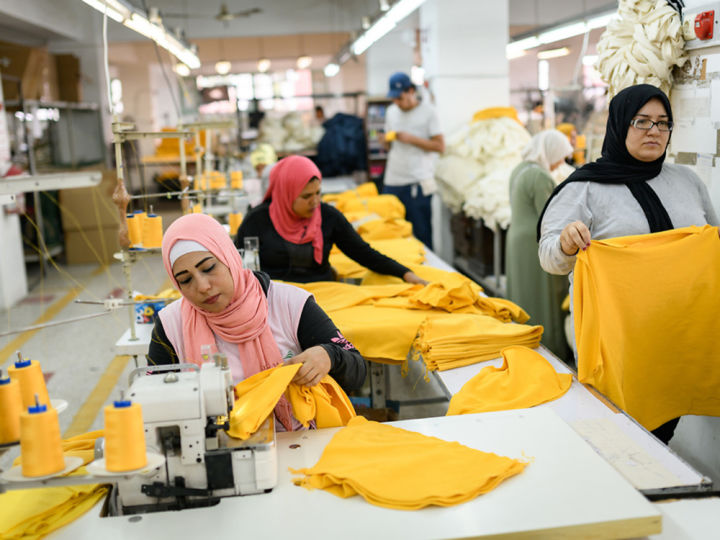 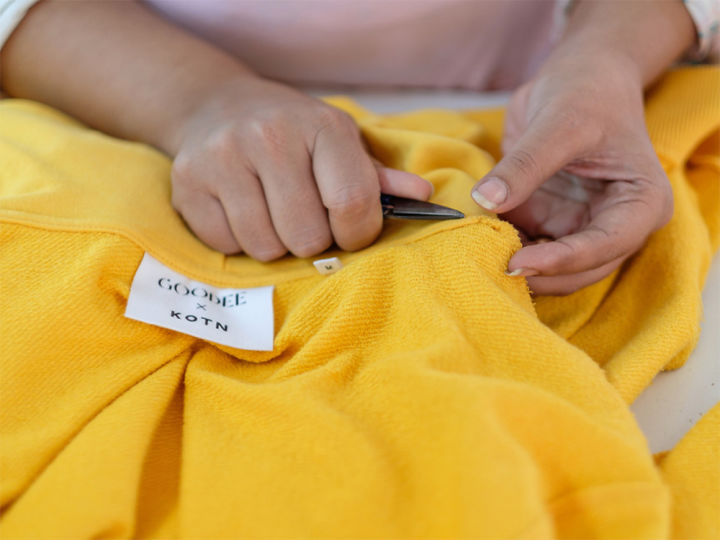 Elise: In the five years of KOTN’s existence, that commitment to transparency has become in essence your brand story. How would you describe KOTN’s traceability standard?

Mackenzie : I think visibility is the only way you can really understand if something is made ethically or not. That’s also why we have a team on the ground in Egypt. We don’t just take certifications at face value, we’re in the factories every day, interacting with people on the line, getting to know them. I think that’s what traceability is to us—it’s about knowing people and knowing what they’re going through.

Elise: On the topic of traceability, can you take us on the GOODEE hoodie journey? Where did the idea come from and how did it travel from there?

Rami : I met Byron and Dexter about a year ago in Toronto through a mutual investor. I remember meeting them and thinking, “Oh, these guys are super smart and they care about the same things we do.” It was a natural thing. We chatted a few times and our head designer, Halla, who is a brilliant woman, and the head of product design at GOODEE, Dina, jammed on some ideas and came up with what it is now.

Mackenzie : Then, we took that idea to Egypt. 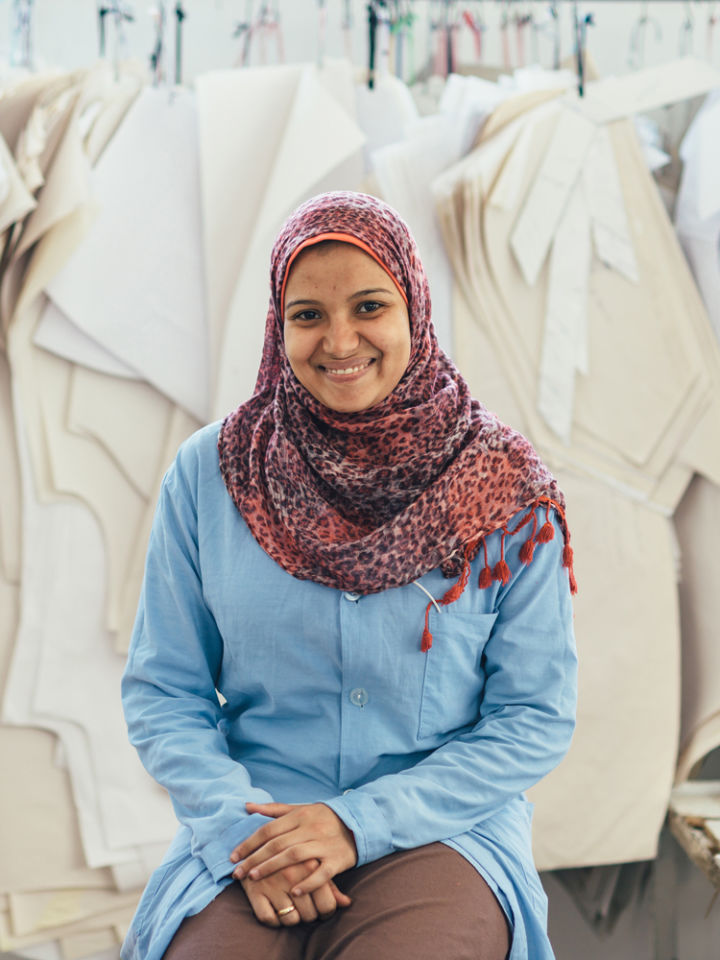 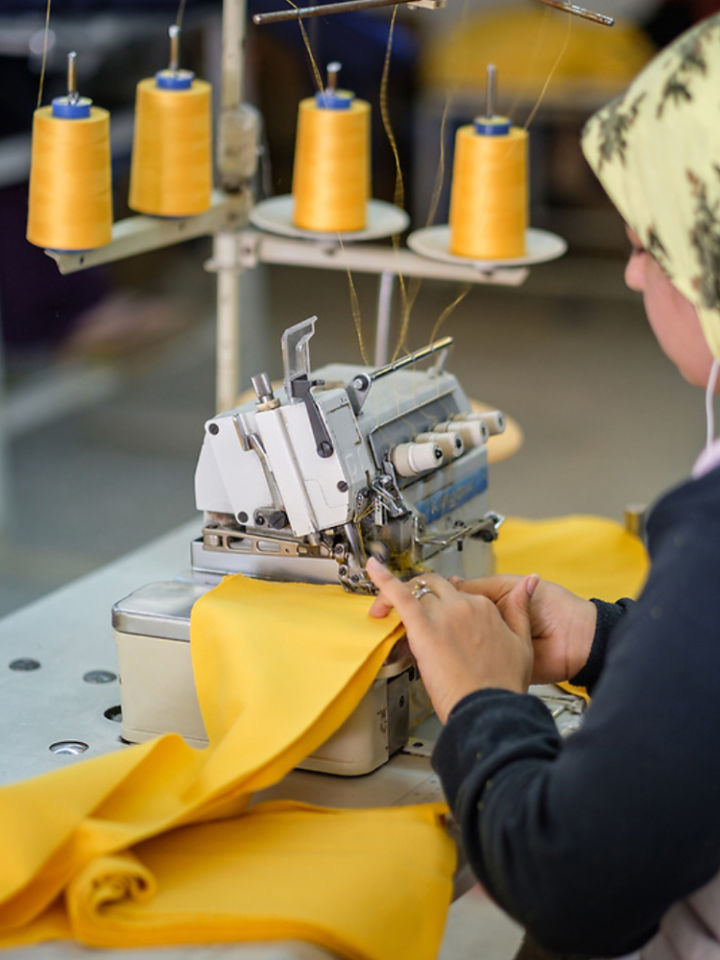 Rami : Kafr El-Shaikh is the province in which we grow the cotton that went into the GOODEE hoodie, specifically a town called El Riad. From there it goes to Borg el Arab, which is right outside of Alexandria—the second-biggest city in Egypt, where it’s spun into yarn. It then goes to a fabric mill just down the street, also in Borg el Arab. From there, it goes to a dye house right outside of Cairo. It is the biggest water treatment facility in Egypt. The dyes are the biggest environmental risk in the textile supply chain. If you’re not using the absolute best dyes with the right standard, there are really horrible chemical runoffs that you can smell from miles away. So, this is a really good dye house. After, it goes back outside of Alexandria to be cut and sewn. This whole process happens in about 200 km—that’s the entire thing, no airfreight, nothing. It’s all locally produced. It takes us about 3 weeks from start to finish. If we’re shipping by container, then that takes another 3 weeks.

Mackenzie: And then they are embroidered in Toronto. That’s the final stage of the project.

Elise: When it comes to the farms, and I believe a lot of them are family-run, how do you foster those relationships and nurture them to this day?

Rami : We started with 12 farms and this year we’re at a little more than 690 farms. It started with personal relationships, as most things do, and then over time the team built a system. We set a guaranteed price from the beginning of the season. We offer more, but require certain quality standards. We also give them fertilizer, agricultural consultation and whatever we can do to increase the yield and bring down their expenses. Since we don’t pay a wholesaler, we have control over our margin. We can run a healthy business and the original margin that used to go to the wholesaler, we try to redistribute throughout the value chain. That’s where the farmers’ subsidies come in, the guaranteed pricing, and making sure that we know every wage of every employee of every single one of our suppliers. And we do external audits for every single one of them.

Elise: So, there’s definite impact on the ground in Egypt, if we bring it back to the product—how do these decisions translate to what we see here today?

Mackenzie : Our perspective on designing is about creating everyday items that you can fit in your wardrobe in multiple different ways. We really have built slowly based on what we think is essential. We’ve only just launched shirts and pants in the last three months. We’re just trying to design things that won’t go out of style, that’ll be able to last you a long time and are usable in many different outfits. And that is a way of being sustainable and how we see sustainability—price per ware or use per garment.

Elise: With the experience you’ve gained, what solutions are worth sharing with consumers or businesses seeking to change their own behaviors?

Rami : I don’t actually know… I think baking it into what you’re doing. As a business, think of all the inputs and ask yourself, “What does each input mean to everything around it?”—just that conscious way of consuming as a business and consuming as a person out in this world. Take a second to think about that hit of serotonin. We’ve been programmed to “want things” and it just isn’t going to end well. We need to want less and place value in things that aren’t physical or material or whatever they may be. And this is directed mostly towards me—it’s an internal shift and it’s a hard thing.

Mackenzie : Yeah, as a consumer I would just say the same thing—consciousness about what you buy. Think about how many times you’re going to wear something or use something. Think about if it’s going to last a long time. I’m definitely not a 100% ethical or sustainable consumer, but just that awareness and educating yourself about these things helps you make better decisions.

Mackenzie : Kaizen, the theory of incremental improvement, I think it’s a little bit better every day, but it doesn’t have to all happen now. 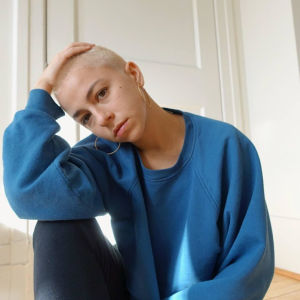 Elise Danielle is a bilingual writer, editor and producer based in Tiohtià:ke (Montreal, Canada). Through memorable encounters and thoughtful conversations, she covers topics related to culture, identity and sustainability.