Words by Laura May Todd
Pictures courtesy of Frama 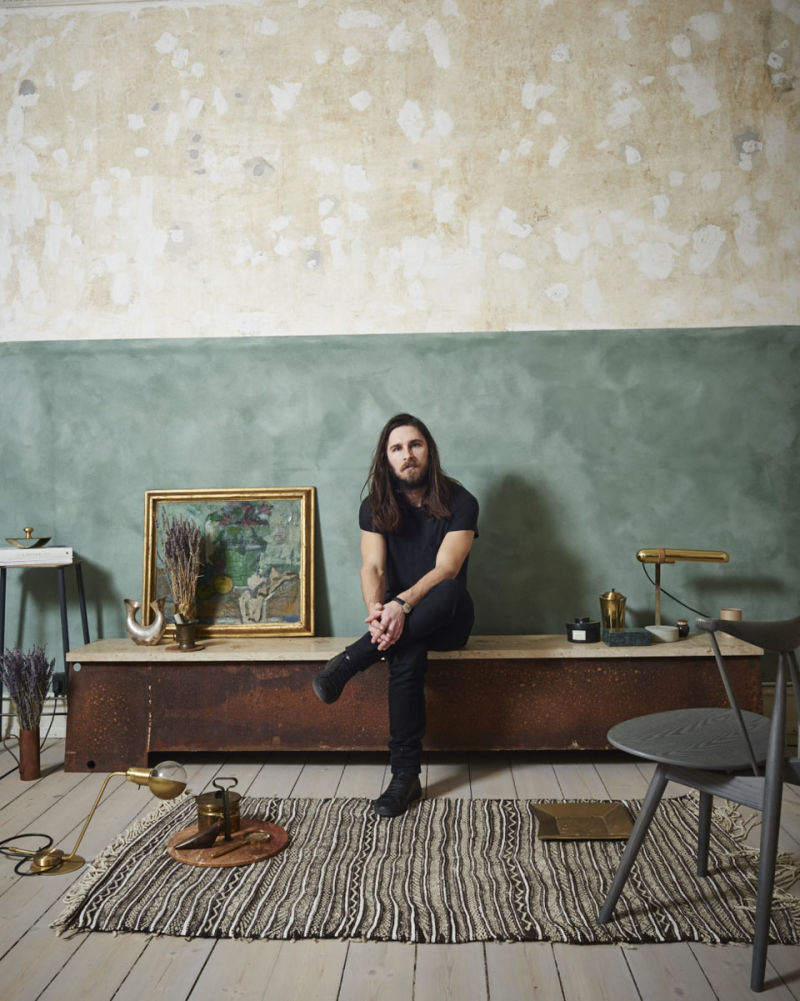 Frama founder Niels at his home in Copenhagen.

Copenhagen-based design brand Frama wants you to slow down. Or, at least, it’s co-founder Niels Strøyer Christophersen does. A passionate purveyor of well-made, long-lasting and functional objects, Frama has been offering up thoughtfully crafted furniture, lighting and home goods since launching in 2011. But Christophersen has been thinking about design for a lot longer than that.
Born in a sleepy suburb about an hour south of Copenhagen, his earliest design memories involve pottering about flea markets and thrift shops as a child. “My mom was dragging me around,” he tells us over the phone from his Nyboder-area headquarters, where Frama has set up shop in a 19th-century apothecary. “I remember being very curious,” he recalls fondly, “I would love discovering things with her, like a delicate vase or a big cabinet in a special kind of wood.”

The treasures they found weren’t expensive or the sought-after prizes of an eagle-eyed collector, they were just well-made things that had a bit of soul. “She loved Danish glassware and ceramics,” he continues, “but the name wasn’t important — it was more about the feel.”

Partially obscured by a long sheet of brown hair and scruffy beard, Christophersen paints his younger self as, “not necessarily awkward,” he remembers kindly, “but I didn’t feel as if I fit into anything.” He worked at a department store and later in sales for other design brands but never felt totally at ease working for someone else. “I wanted independence,” he describes of his early motivations, “I always knew I wanted to start my own company.” Spurred on by the values instilled in him by his design-minded mother, launching his own brand seemed like the natural choice.

“The beginning of Frama was very spontaneous,” Christophersen explains of their arrival on the scene, which launched with the Sutoa cabinet and round Sintra table in cork and natural stone, designed by a friend based in Portugal using all local Portuguese materials. “There wasn't time to think of something extremely strategic or make a big business plan. Everything was very honest and intuitive.” Built around tenets of simplicity, integrity and essentialist design, Christophersen and his team of co-founders and collaborators grew the brand in the image they desired to see in the world. They rejected lightening quick trend cycles, flimsy, disposable materials and style-driven forms. “We work with essential shapes and solid, natural materials,” he tells us of the brand’s ethos.

“Change is the only motion here in life,” he explains of this desire for longevity, “and we should celebrate that.”

The Sutoa cabinet and Sintra table, the first 2 products from Frama.

“Scandinavian design is only seen these days as an aesthetic,” he clarifies, referring to the low cost, big-box design stores that have infiltrated our homes with their build-in-a-day wares. “It’s really about the materials, the craftsmanship, the function of an object. It’s about pieces that were made to last.”

At home, Christophersen practices what he preaches. “I have the same collecting gene as my mother, but I’m trying to work around it,” he admits when asked whether or not his own home is piled high with vintage scores. Instead of actively accumulating beautiful objects — like most of us even tangentially related to the design world do — he’s in the process of shedding extraneous items he’s thus far collected, in favour of living alongside a few well-made things that have a personal meaning. “I’m turning into an anti-collector,” he jokes about the recent divestment.

Niels' home is a restoration of a 1905 watchmaker’s store with a focus on design, simplicity and natural materials.

At the heart of Christophersen’s credo is a belief that one’s relationship with objects should be unfailingly long term. Instead of chasing what’s new or hard to come by like a typical design obsessive, he prefers to sit with what he has. To observe how certain pieces evolve and weather with time, to see patinas forming and note how memories are held in scratches and bumps.

“Change is the only motion here in life,” he explains of this desire for longevity, “and we should celebrate that.”

Planting the Seeds of a More Sustainable Furniture Industry

Introducing Skagerak, a Danish manufacturer with a deeply-rooted social and environmental purpose.