Free standard shipping on all orders $75USD and above*

The Bassi Market Tote:
A Story of Freedom and Hope 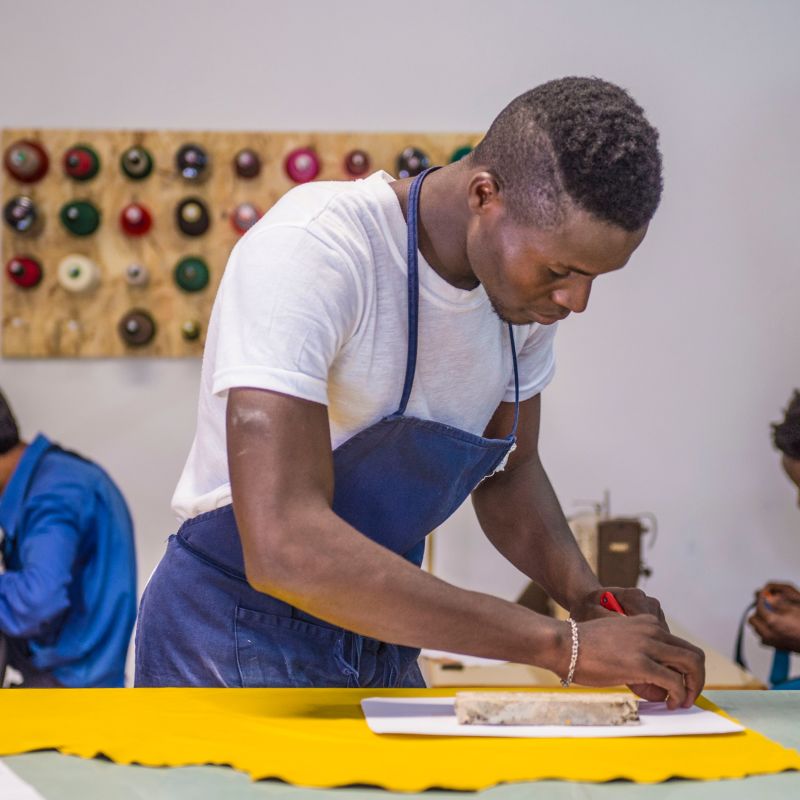 Nestled in the rolling hills of the Bologna region, in the former industrial complex of the Lama di Reno paper mill, Cartiera is the social cooperative that brought the Bassi Market Tote to life weeks before Italy became the epicenter of the Covid-19 outbreak in Europe.

The town surrounding Cartiera in Lama di Reno photographed by Dexter Peart during a visit to the workshop.

Cartiera was established in 2017 by the Ethical Fashion Initiative (EFI) in collaboration with Lai-momo, a local social enterprise, to help people in difficult situations — particularly refugees, asylum seekers, and migrants. To accomplish its mission, Cartiera gives the opportunity to earn an income from making high-quality products bearing the coveted 'Made in Italy' label in a responsible way, along with adequate training to complete that work.

Beyond providing a stepping stone to economic independence, the cooperative is also building a new production model, which combines sustainable practices with the development of the region. Indeed, conscious of its historical legacy, Cartiera’s long-term objective is to help revive the once-thriving area around Lama di Reno, now struck by depopulation, by generating resources that positively impact the local economy while preserving Italy’s world-renowned artisanship.

Through this project, it is the story of people coming together to help migrants integrate into their community, away from the spotlight, and the story of hopeful young men and women seeking a better future that is being told. It is a powerful story of human connection and empowerment, which didn’t fail to inspire Goodee’s founders, Byron and Dexter Peart.

The Bassi Market Tote celebrates this spirit of cooperation and spreads a message of hope. Crafted using beautiful cotton fabrics handwoven in Burkina Faso through EFI’s weaving cooperative, the tote was named in honor of Bassirou, the talented lead artisan who oversaw the entire production process, working closely with Goodee. His pride and joy at being a part of the project are palpable when he talks about his journey with Cartiera, which started with a six-month training course back in 2017. “It was difficult in the beginning because we didn’t know where this was going, but then we found projects and ways to move forward, which brings a lot of satisfaction. We’re very happy,” he says enthusiastically. The young man feels especially grateful for being able to take care of himself after many hardships. “Cartiera is another life for me.”

“Cartiera is another life for me.” - Bassirou

Like many other young people tempted to emigrate to look for better opportunities elsewhere, Bassirou took a leap of faith and fled his native Burkina Faso — one of the poorest countries in the world — in the midst of political turmoil to find a better life in Europe. His journey took him through the Sahara to Libya, from where he would attempt to cross the Mediterranean by boat. Instead, he was intercepted, taken to prison, and forced into labor. Six months later, Bassirou managed to leave Libya and make his way to Italy by sea. From Sicily, where he landed in 2016, he was transferred to the Bologna area in northern Italy, which is home to a major transit center for migrants, then welcomed by social cooperative Lai-momo in Lama di Reno a few months later. He did not speak a word of Italian.

With only little prior experience in fashion manufacturing to draw on, the young man started training at Cartiera. There, under the guidance of expert artisans, he learned how to cut leather and sew using traditional techniques and craft tools, effectively inheriting an art rooted in the history and culture of Italy. During that time, Bassirou also improved his Italian skills. By getting a better grasp of the language, he was able to make friends and assimilate rapidly. Recalling how isolated he felt during the first months when he was struggling with the language barrier and adjusting to his new environment, he adds:

“[The program] has kept me motivated through the tough times."

All this hard work, resilience, and grit really paid off since Cartiera hired Bassirou as a craftsman after two years of apprenticeship. And while it may take a few more years of honing the craft to be considered fully trained as an artisan, Bassirou is determined to achieve yet another goal in the meantime — to earn the diploma he wasn’t able to get in Burkina Faso and start university.

As Italy is seeing a glimmer of hope two months after discovering the first official Covid-19 case, turning the conversation to the daunting question of when and how to reopen, the whole Cartiera team is looking forward to returning to the workshop and continuing its mission to create a more equitable world one beautiful handcrafted bag at a time.

Katia and Bassirou finalizing a pattern.

How the collaboration with ethical fashion brand KOTN came to be and how it took us on a meaningful journey between Canada and Egypt.

Every day at Goodee is an opportunity to celebrate the trailblazing female founders behind brands that do good.